The RPi4 is identical in size and construction to the RPi3, with the exception of dual HDMI outputs and better USB and Ethernet capabilities. Wireless connectivity and Bluetooth 5.0 are two additional important features. In terms of performance and functionality, the Raspberry Pi 4 B establishes a new standard. The Raspberry Pi 4 B is three times quicker than its predecessor, the Raspberry Pi 3 B+, and has four times the multimedia performance (comparable to the desktop performance of an entry-level x86-based PC). 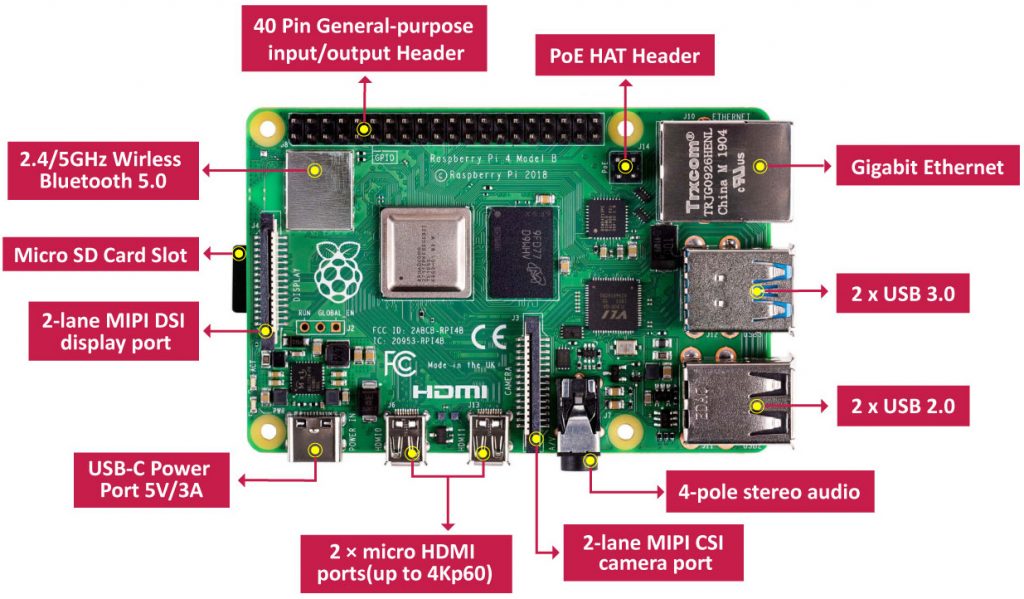 Pinout of the Board:

There are some items needed to start with RPi :

How to Start with Raspberry pi 4 Model B:

Step 1: Go to Google or Bing and type raspberrypi.org into the search box.

Step 2: Go to the downloads area of the Raspberry Pi website.

Step 3: Then you'll see an option for Raspbian or Noobs (Raspbian is the operating system, and Noobs is an online OS downloader and installer). If you're a beginner, you can just download Raspbian manually because the installer can be confusing for new users, and online installation can sometimes be interrupted.

Step 4: You should now see three versions of Raspbian with various configurations; simply choose Raspbian Buster with desktop and recommended applications and download the ISO file.

Step 5: After you've downloaded the operating system, you'll need to download and install the following programs on your computer:

Step 6: Using a card reader, connect the MicroSD card to the PC and format it with the software described above.

Step 7: Using 7-Zip, extract the file you got from the Pi site by right-clicking on it. (Note: I've found that using WinRAR corrupts the file.)

Step 8: Now that you've extracted an ISO file, open the Balena etcher image flasher and drag and drop the picture into Select Image:

Step 9: Finally, pick the MicroSD card on which you want to install the OS and press the flash button.

Step 10: When the flashing is complete, remove the MicroSD card from the PC and insert it into the Raspberry Pi.

Step 11: Now that the OS portion is complete, connect the USB or Bluetooth Mouse Keyboard to the Raspberry Pi.

Step 12: Use a Micro HDMI to HDMI cable to connect the Pi to the display.

Step 13: Turn on the display first, then plug in the power adapter to turn on the Pi.

Thank you very much!! You've learned how to set up a Raspberry Pi 4 as a personal computer.